The Beautiful People: Gaga as Post-Goth 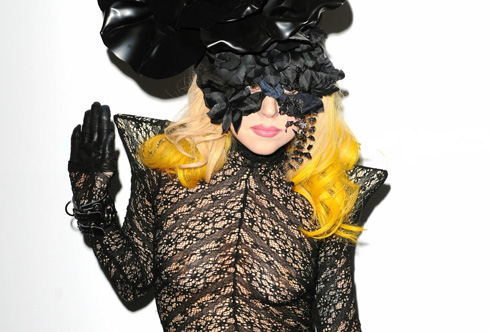 So, the Gaga-Madonna connection is a totally overworn topic. Gaga encourages some of the comparisons, but I think that Madge is NOT the artist we need to see as Gaga’s immediate aesthetic ancestor and interlocutor. It’s Marilyn Manson.

Yep, Gaga is more like Marilyn Manson than she is like any pop diva. Think about it: she calls her fans “little monsters,” she constantly talks about/focuses on her own weirdness/monstrosity/alienation, she’s into genderfucking and queerness, she displays her body’s ugliness rather than its straightforward desirability, she wears uncomfortable, awkward, constricting garments (including razor glasses and caution tape), and she never shies away from a chance to reference Leni Riefenstahl. Hell, Gaga could’ve written Ministry’s “Everyday is Halloween”…

“Bad Romance” and “Alejandro” are her two most “goth” videos…That machine-gun bra in “Alejandro” just begs for membership in the Trenchcoat Mafia (she did poison a whole restaurant full of people in “Telephone,” after all). There’s a ton of quasi-Christian imagery in “Alejandro,” but it’s FAR more “Antichrist Superstar” than it is “Like a Prayer.” (Just think about it: “Like a Prayer” is all major-mode, gospel choir feel-good affirmation, but “Alajandero”’s main harmony is pretty dissonant, and it’s a song about loss.)

More goth-y things about “Alejandro”:
 Steampunk/Victoriana in the costuming
 A pierced heart on a pillow
 Coffins
 No eyebrows
 Boys, girls, and genderqueers in lots of latex
 Sex is not sexy, but violent and weird
 Dancing Nazis
 Melting faces
 The lighting/filtering used in the video: it’s really dark and everyone is really pale
 All the white people
 Tons of musical references to Scandinavia
So, a Manson videos for comparison:

1. “The Nobodies” – The general aesthetic is similar to the BR/A videos, but the tree outfit here is particularly reminiscent of the white vinyl tree/Cremaster-like monsters in BR.

Now, it’s important to qualify Gaga as POST-goth: she’s the awkwardness, grotesqueness, queerness and monstrosity filtered through pop. Gaga’s not trying to be directly oppositional, as Manson was; her work is very palatable to mainstream audiences. It’s the FAME Monster, after all…At the same time, this is a queer, grotesque, monstrous pop. The sequel to “Just Dance” is a slick and glossy song about a zombie (“Monster,” where she sings “he ate my heart then he ate my brain”…but then, “Thriller” is also a slick and glossy song about zombies…).

There’s a lot more thinking I need to do/to be done on the Gaga/goth issue, but I think it’s important to draw attention to this. If anyone else out there has seen an article/blog post/tweet/whatever on Gaga & goth, I’d appreciate if you let me know about it.

← Whatever Philosophy Is, It’s Most Certainly Not About Girls: Or, why people hate Nancy Bauer’s NYTimes column on Beauvoir and Gaga
The Last Angel of History →