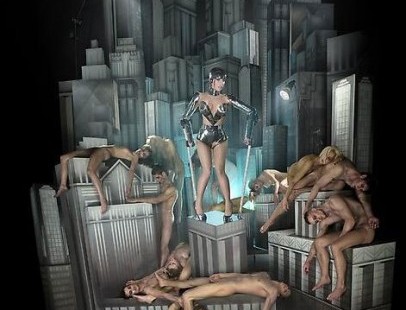 This robot is SO not a dick in drag, Part 3: Lady Gaga

Gaga chooses the robot, sometimes. For example, in this David LaChapelle photo, her “Paparazzi” costume clearly references Lang’s robo-Maria (note too the city and the Derrigible!).

All the adult humans are dead, and the sole survivors are robo-Gaga and, if you look at the bottom center of the photo, a baby (its arms are raised and eyes seem to be open, so it at least appears to be alive). So, perhaps here we have a posthumanism that does not oppose itself to reproductive futurity.

On the other hand, nobody survives Gaga’s food-borne massacre in her Telephone video. 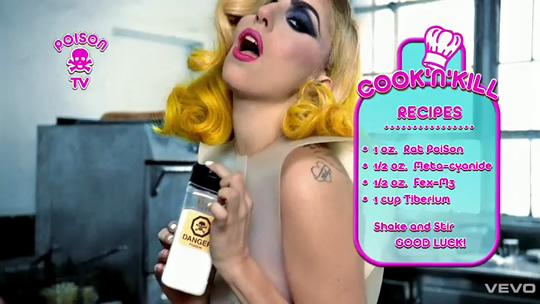 Interestingly, as geeksugar has noted, the deadly recipe refers to three separate scifi universes: Meta-Cyanide is from Dune, Fex-M# is from Star Wars, and Tiberium is from Command & Conquer.* These scifi references approach, in some ways, the posthuman (e.g., Darth Vader), but they are not direct appropriations of it, as we find in Beyonce. There are plenty of queer and gender non-conforming bodies in Telephone, and the lyrical content of the song is a woman’s refusal to hail the call of the patriarchal ideological apparatus. However, Telephone is not itself very posthuman. In fact, the most posthuman thing about it is Beyonce—specifically, those herky-jerky shots of her in yelling at the phone while wearing a king-of-pop jacket. Telephone doesn’t connect posthumanism to a critique of reproductive futurity.

As in Telephone, Paparazzi’s posthumanism is the effect of Gaga’s rejection of patriarchy (i.e., her refusal to be killed by her boyfriend). [The prequel to Telephone, Gaga’s revenge-killing of her misogynist boyfriend is the reason she finds herself in jail, waiting to be sprung by Bey. Which is also worth considering—in the Paparazzi/Telephone duo, patriarchy tries to kill Gaga, but a posthuman black woman saves her.] In the beginning of the video, Gaga’s bf throws her off a balcony. As a result of her injuries, at 3:17, she returns in the form of a chrome Maria-robot on crutches.

The Maria-effect also appears in the dress she wears in her mug shot, around 6:50. This video is the one instance where Gaga definitively chooses the robot as such, and the robot appears when hetero love ends in (attempted) murder. However, it is also an instance where people of color are portrayed only as household servants (not, as in her collaborations with Bey, as partners).

Bad Romance also has its posthuman moments: there’re the quasi-Cremaster white vinyl monster costumes, the anime-eyes, the McQueen insect suit, and, of course, the steampunk fembot bra. The song’s lyrical content is about a bad romance, an unsuccessful one, one without a future. So there is a sort of posthumanism here, but it’s more goth than Afrofuturist. We have monsters, insects, coffins, death, destruction, and decay. I’m sure someone has already written about this, but I wonder if certain types/styles of goth can be thought of as a sort of white posthumanism?

Perhaps the most posthuman thing about Gaga is her LED-rific “disco stick.” It’s a glowing baton that is effectively Gaga’s phallus. That “disco stick” = phallic is made clear by the lyrics of “Lovegame,” where Gaga refers to a man’s genitals as his “disco stick.” There were also once rumors that Gaga herself was intersex/a transwoman. However, it is clear that Gaga’s “disco stick” is a lit-up prosthesis that looks a lot like a drum major’s baton. 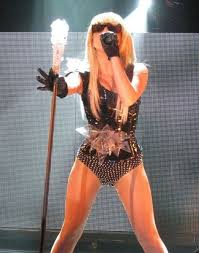 What is interesting here, of course, is that the most posthuman thing about Gaga is her phallus—her instrument of quasi-patriarchal power. So, while Madonna pretty much adopts white patriarchy and becomes, as bell hooks argues, a “dick in drag,” and while Beyonce offers an Afrofuturist feminist critique of white patriarchy, Gaga offers us a sort of “monstrously” deformed white patriarchy. What Gaga gives us is not something that white patriarchy would recognize or own, but neither is it a full-throated critique of it. Gaga is neither a “dick in drag” nor a robot—she’s a disco stick, a monstrous deformation of both the dick and the robot.

So, ultimately, I’m proposing that we consider Gaga’s post-goth “monstrosity” as a sort of intermediary between hetero-patriarchal humanism and Afrofuturist posthumanism. I certainly need to think more thoroughly and more carefully about the precise nature of Gaga’s relation to goth, and about goth’s relation to the post-/in-human and to the monstrous qua queer/non-white Other. However, I do think that framing Gaga’s work in terms of post-goth “monstrosity” is really helpful in situating her both politically and aesthetically.

Leave a Reply to RIOTRIOTRIOT Click here to cancel reply.

← Robots, Cyborgs, and the Master/Slave Dialectic
“Why do we keep falling in love with cyborgs?” — Interestign poste by Newitz over on i09 →