Dance in the Dark, Little Monsters: preview of my contribution to “Gaga Stigmata” book 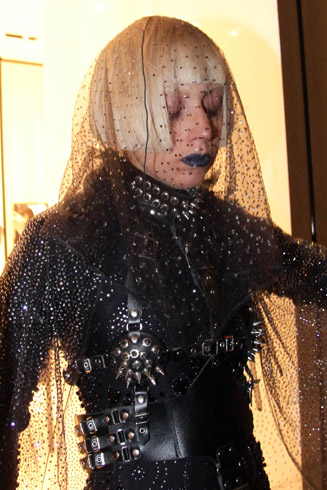 I’m excited to be contributing to a collection on Lady Gaga, curated/edited by the people who run the fab Gaga Stigmata blog. My essay, “Dance In the Dark, Little Monsters: On Gaga’s Post-Goth Posthumanism” will sound somewhat familiar to readers of this blog. I’m re-blogging below (with my own revised picture) the excerpt published here, on the GS blog:

The following is an excerpt from a longer article to be published in Gaga Stigmata’s forthcoming book. In that piece, Professor Robin James argues that Lady Gaga’s main aesthetic ancestor is goth. Gaga’s work not only has direct musical debts to goth bands, but also takes indirect visual and thematic inspiration from the goth genre. In the following excerpt, James examines how one of Gaga’s songs takes musical cues from the goth tradition, and then demonstrates how Gaga’s work goes beyond that tradition: that is, how Gaga performs post-goth posthumanism.
The most obvious similarity between any one Gaga track and any one goth-y track is between “Dance in the Dark” and Depeche Mode’s “Strangelove.”[i] Both songs are composed around essentially the same treble synth hook. Gaga’s track pulls an “Ice Ice Baby” on Depeche Mode’s original, altering the hook’s melody by turning a quarter note into two eights on the same pitch (basically, making the antecedent phrase a more exact mirror of the consequent phrase).[ii] Overall, Gaga’s sound shares a lot with Depeche Mode – and, to an extent, Yaz (which splintered off from Depeche Mode in the early 1980s). Early Depeche Mode was very synthy and proto-industrial, particularly their 1983-1984 releases Construction Time Again and Some Great Reward.[iii] The videos for “People are People” portrays band members playing parts of the manufacturing process, e.g. corrugated metal, as instruments.[iv]

Screenshot from the video for “People are People”
This use of factory machines and raw materials as musical instruments is more or less what defines industrial music as such. So, while Depeche Mode might not be the most “hardcore” industrial act, the band clearly writes some properly industrial music. In fact, Depeche Mode’s combination of industrial and mainstream synthpop is actually quite similar to Gaga’s own music. “Strangelove” appears on the 1987 album Music for the Masses, which takes the earlier albums’ industrial and synthpop sounds in a more mainstream, poppy direction. “Dance in the Dark” uses guitars in combination with synths and drum machines, as does Depeche Mode’s work on Music for the Masses and Violator. Yaz was even more distinctly synthy and electronic, but, like Gaga’s work, was and still is received and treated as belonging to the post-Moroder electro-dance-pop tradition. Gaga’s powerful and soulful alto vocals are quite obviously reminiscent of Yaz’s lead singer, Alison Moyet. Although her voice may sound like Moyet, Gaga’s songwriting, especially her approach to vocal melodies, is closer to Dave Gahan’s (Depeche Mode’s lead singer). Unlike many industrial bands, which rely on either more aggressive, closed-throated metal-influenced vocals (like KMFDM), or more minimal, often effected, vocals (like Kraftwerk), both craft long, very melodic vocal lines that require some serious singing. Although Moyet was a very strong and expressive singer, her phrases were relatively short and distinct.
So, while Gaga’s image might lead some to think of her as a postmillennial Material Girl, her sound demonstrates that she’s more like a twenty-first century update of Depeche Mode and Yaz: strong female vocals and synthy industrial darkness combined with a pop melodic sensibility. She acknowledges this influence in a press release for The Fame Monster: “this album is a pop experimentation with industrial/Goth beats, 90’s dance melodies, an obsession with the lyrical genius of 80’s melancholic pop.”[v] Depeche Mode encapsulates all these influences, and is perhaps the clearest and closest of Gaga’s musical influences.
In this section, I’ve discussed Gaga’s music as such, and put her compositional and performance choices in the context of both specific goth/industrial songs and the goth/industrial aesthetic more generally. Above and beyond anything her visual or textual presentation does, Gaga’s music is grounded in a goth dance tradition that stretches from Joy Division to Nitzer Ebb to Wax Trax to Attari Teenage Riot. Like Depeche Mode and Yaz – and, more recently, Nine Inch Nails – Gaga combines industrial instrumentals with long, sung melodic phrases with a classic pop or even musical theater sensibility. Both because Gaga’s own work combines specifically goth references and aesthetic choices with influences from a wide variety of other genres (thus “watering down” the goth references), and because mainstream pop itself bears the influences of industrial and EBM (thus making mainstream pop more “properly goth”), Gaga’s latter-day Wax Trax pop diva sound is stylistically “post-goth.” In Gaga, goth is no longer an indie subgenre, but chart-topping and download/page-view-record-breaking music for the masses.
In the next section, I turn to Gaga’s visual and textual production. Not only is her post-goth status more evident in these contexts, but this is also where her post-goth sexual politics are most evident. Gaga’s sexual politics are more properly “goth” than, say, Depeche Mode’s because the latter artists’ songs often positively represent (and even incite) sexual desire as such, Gaga calls into question the very desirability of sex and sexuality (as an act, as desire, as an identity).
For example, “Dance in the Dark” emphasizes the grotesque and debilitating effects that the performance of heteropatriarchial constructions of femaleness and femininity has on women’s bodies and psyches. The first lines of the song describe the normatively desirable and “sexy” female body as the “monster” created by a Frankenstein-esque beauty industrial complex: “Silicone, saline, poison, inject me.” Moreover, the refrain offers a fairly traditional white feminist critique of the male gaze: “baby loves to dance in the dark/cuz when he’s looking she falls apart.” “She” does not experience pleasure in men’s scopophilic objectification of her body; she cannot bear its weight, and can experience a coherent (rather than shattered) corporeal schema only when she is certain “he” (i.e., patriarchy) can’t see her. A later verse presents non-patriarchal constructions of female desire as monstrous: “Run run her kiss is a vampire grin/The moon lights away while she’s howling at him.” Under the light of the moon – which is traditionally identified with women and their menstrual cycles – rather than under the Apollonian light of patriarchal truth and reason, female sexuality appears inhuman (and, notably, as a classic goth icon, the vampire).
Both Gaga’s and goth’s sexual politics turn on the figure of the monster. Like goth, Gaga uses images and figures of posthuman monsters to critique heteropatriachial norms governing gender and sexuality.
[i] Lady Gaga, “Dance in the Dark” on The Fame Monster New York: Interscope 2009. Depeche Mode, “Strangelove” on Music for the Masses, London: Mute, 1987.
[ii] Vanilla Ice’s early 1990s track “Ice Ice Baby” samples the bassline from Queen and David Bowie’s single “Under Pressure.” However, Vanilla Ice (Robert Van Winkle) has claimed in several instances that the bass loop in his track is in fact not the bassline from “Under Pressure” because his bassline has an extra note. See Stillman, Kevin (February 27, 2006). “Word to your mother“. Iowa State Daily. http://www.iowastatedaily.com/articles/2006/02/27/news/20060227-archive5.txt.
[iii] Depeche Mode, Construction Time Again, London: Mute, 1983. Depeche Mode, Some Great Reward, London: Mute, 1984.
[iv] Video available here: http://www.youtube.com/watch?v=MzGnX-MbYE4, accessed 27 November 2010.
[v] See “Lady Gaga Returns with 8 New Songs on ‘The Fame Monster’ from the website “PR Newswire”: http://www.prnewswire.com/news-releases/lady-gaga-returns-with-8-new-songs-on-the-fame-monster-63780227.html. Accessed 28 November 2010.

← When Maya Angelou and James Baldwin Walked into a Bar…
London’s Burning, part 1.1: Lee Edelman Fought the Law, and the Law Won—Edelman’s response to Halberstam →