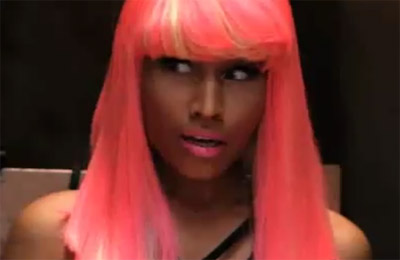 UMG is being quite strict about policing copies of the video, so your best bet is to google for the most recent and reliable stream.

I finished up a few things over winter break, so I’ve had some time to think more carefully about Kanye West’s “Monster.” The video has gotten a lot of attention, especially for its liberal use of dead women. Now, I’m the last person to minimize misogyny in music, but I think any responsible reading of the video will need to be carefully attuned and attentive to the various contexts that inform the making and reception of the video. So, let’s keep in mind the following:

· Thriller’s legacy, including but not limited to: NIN’s “Closer,” Rihanna’s “Disturbia.”

· The zeitgeist: Zombies and Vampires are seriously everywhere. There’s The Walking Dead, True Blood, Dead Set, Being Human, the Twilight Series, the Vampire Diaries, the enduring legacy of Buffy the Vampire Slayer, Let Me In/Let the Right One In…the list goes on and on. Then there’s Lady Gaga’s whole post-goth monster obsession. Note too that both men and women are portrayed as monsters (zombies, vampires, etc.) in the video.

· Sarcasm. In Blues Legacies and Black Feminism, Angela Davis repeatedly notes the tendency for mainstream white/male audiences to always take speech by black women literally, i.e., at face value. They seemed incapable of recognizing or admitting that black women were intellectually capable of figurative speech (sarcasm, irony, literature). West’s “Everybody knows I’m a motherf*cking monster” is pretty obviously meant to be taken sarcastically. I don’t think he really thinks he is a monster. Similarly, Jay undercuts the whole “monster-as-metaphor-for-macho-hiphop-posturing” by saying that the monstrous persona is really just an attempt to hide his emotional vulnerability. Salon’s Tracy Clark-Flory seems to be guilty of exactly this inability to recognize black figurative speech as such: http://www.salon.com/life/feature/2011/01/11/kanye_dead_women/

· And, one really, super-important historico-cultural consideration: anti-black racism. Two specific forms/tropes of anti-black racism seem particularly relevant to West’s video. First, there’s the portrayal of black men as hypersexualized, predatory monsters who would ravage white women were it not for the protection of white men. In other words, remember Birth of a Nation. Second, there is the tendency (identified most notably by bell hooks in the late 80s/early 90s) for white/mainstream media to act as though the misogyny in hip hop is unique to black culture (i.e., caused by/evidence of black men’s monstrosity), and not emblematic of and thoroughly imbued in mainstream/white American culture. As Catherine Clement has shown, European art music has its own obsession with dead women; name a famous, cherished opera, and it almost certainly includes the death of a woman as a major plot point and source of musical pleasure. There’s Carmen, La Boheme, Tosca, Madam Butterfly, Don Giovanni, Tristan und Isolde…While I certainly think feminists need to question the video’s use of dead women, I worry that many such feminist criticisms are tinged with (perhaps even grounded in) racist assumptions about hip hop and black men.

So, before we go condemning the video as egregiously misogynist, as endorsing the trafficking of women, etc. etc., let’s consider the idea that Kanye is using figurative speech to comment on anti-black racism. Perhaps the claim here is this: Because of anti-black racist attitudes about black men, and especially about what black men do to white women, everybody seems to have think I’m some kind of exceptionally horrific monster, when I’m really just your regular old run-of-the mill asshole.

It’s also interesting to me that the people who condemn the video’s misogyny never look at Nikki Minaj’s performance, which is frequently lauded (especially by those critics who don’t comment on the video’s treatment of women) as the best performance on the track. I’m not at all going to argue that women can’t be misogynist—they can be and quite often are. For example, in this video, I’m not entirely happy with the somewhat trite and stereotypical deployment of the virgin/whore dichotomy. However, I think Nikki’s performance impacts the way West’s and Jay’s verses must be interpreted. Nikki actually visually and vocally stages the very “doubleness” required for figurative speech to work (Interestingly, many black artists adopt this alter ego, perhaps explicitly in order to make it obvious that they’re making shit up, and should not be interpreted literally). There’s mean aggressive Nikki and girly Nikki—we hear these two vocal personae throughout her work, and they appear on this track too. NM uses girly Nikki to undercut the whole “great rapper as monster” conceit that West and Jay develop in their verses. The content of her verse argues, just as her technique demonstrates, that she is, at least at this moment, more technically proficient and critically acclaimed than these other two more established male artists. What’s really interesting is that the ueber-femme “good girl,” the one who’s outwardly not the monster, actually gives the best lines and shows her technical and commercial dominance as an artist. She asserts:

Let me get this straight, wait, I’m the rookie?/but my features and my shows ten times your pay?/Fifty K for a verse, no album out…And I’ll say Bride of Chucky is child’s play/Just killed another career it’s a mild day/Besides ‘Ye they can’t stand besides me.

So the outwardly least monstrous figure—the captive “good girl”—is lyrically, technically, and commercially most “monstrous”. Her game is more devastating than a horror film, she kills careers, etc. Now, we could take this to be some version of (1) “Never trust a big butt and a smile,” or (2) It’s always the hot white women who destroy civilizations (Battlestar Gallactica, hello?), but I don’t think the claim here is that women are “poisonous” and need to be killed (or, as West says earlier, asphyxiated and put in a sarcophagus). West and Jay spend the first part of the video performing what superficially appears to be standard misogyny-as-macho-posturing: their power over women is supposedly evidence of their greatness as men and as rappers. However, they are totally pwnd by a young, femme female rapper in a pink wig whose voice is about as cute and high pitched as bell hooks on helium. So, NM’s performance makes it really hard for us to take KW and Jay are seriously arguing that we ought to treat women like monsters, and women are only good when they’re dead. Instead, they’re saying: “You think we’res sooooo awful. You think we butcher women, that we’re sociopathic, inuman beasts. But really, we’re not. In fact, perhaps you’re projecting your own misogyny onto us.”

I won’t go so far as to say the video doesn’t have any problems. I’m still chewing on my impression that the video tends to portray white women as dead victims, but black women as dangerous monsters. I just want everybody to slow down and think a lot more carefully about the video and the rappers’ performances. Perhaps b/c it’s pop music, people think a superficial reading is sufficient. As I’ve only begun to show above, this video is a lot more complicated and nuanced than any unilateral (or, to use my favorite piece of Hegel jargon, “one-sided”) proclamation about the video can admit.

← Fascinating 2010 Music Trends That I Will Examine Further If They Continue In 2011
Cinderella Ate Hip Hop: Nicki Minaj vs. Peggy Orenstein →