January 6, 2012 · by Robin James · in blackness, Drake, gender, Jon Pareles, Kreayshawn, postmillennial black hipness, race, shepard fairey, skeptical melancholy, the protestor, Time person of the year, Toure, white female rapper, white femininity
I want to take a minute to reflect on the representations of race, specifically, the representations of African-American blackness, in US pop culture in 2011. In several blog posts, and a few of my published works, I’ve argued that stereotypical ghetto-black masculinity (e.g., the “thug” or “gangsta” identity that is most commonly trafficked in mainstream US hip hop) has become so thoroughly co-opted that it no longer functions as a symbol of resistance, oppositionality, radical politics or aesthetics, etc—representationally, affectively, aesthetically, “thug life” is no longer something that immediately strikes fear into the hearts of 21st-C bourgeois parents, politicians, or culture warriors. To be absolutely clear: I’m not saying that things have gotten better for actual African Americans, or that anti-black racism has in any way been ameliorated (in fact, I think these shifts make anti-black racism more insidious, more difficult to identify, and more firmly entrenched). Representationsof a certain kind of blackness have been co-opted in ways that don’t actually benefit African-Americans as a whole, or anti-racist projects in general. The “cultural value” or symbolism of a certain “controlling image” of black masculinity has shifted; we’ve left the classic “Love & Theft” logic of 20thc white hipness for a new, postmillennial economy of racial cultural value/semiotics.
There’s some pretty solid evidence for this argument about the shifting racial-representational economies in the mainstream media in 2011. In this post, I want to briefly survey a few different indices of this shift to what I call elsewhere “postmillennial black hipness.”
Radical Third-World Woman of Color is the “New Black”
The appeal of “black” culture for (bourgeois) white (male) audiences was its apparent oppositionality; now that this very stereotypically “oppositional’ black masculinity has been thoroughly co-opted by the culture industry, white hipsters need to find new symbols with which to demonstrate their radical chic—I mean, “cred.” I discuss this extensively in my article on Kanye West and Shepard Fairey. What’s notable about the cultural/political milieu of 2011 is the way this same logic of postmillennial hipness got seriously mainstreamed in/by mainstream media comparisons between OWS and the Arab Spring. OWS protestors, who are overwhelmingly white (and majority male), were compared, and sometimes compared themselves, not to African-American civil rights movements, but to various recent Middle-Eastern (who I’m assuming are not uniformly “Arab” in ethnicity…) and North African anti-government movements. This is epitomized in Time magazine’s cover illustration of its’ Person of the Year, “The Protestor”—an image rendered, notably, by Fairey, in the style of his other postmillennial portraits of radicalized non-Western women of color (which I discuss in the article above). 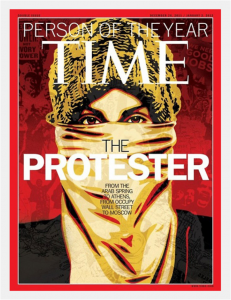