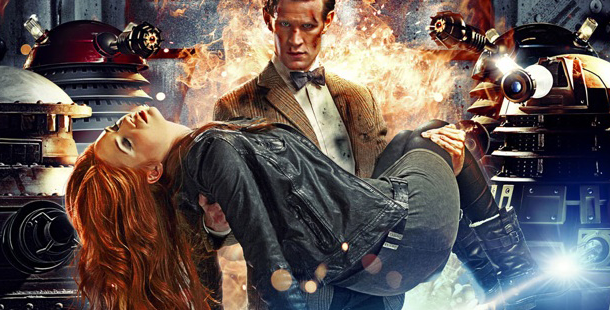 I watched “Asylum of the Daleks” last night; it’s the first episode in the new season/series of Doctor Who. Pro: lots of Daleks, and the eggs/exterminate puns. Cons: Moffat’s continued, disappointing, if expected, misogyny.

First, there’s Amy’s stated reason for “giving up” Rory–as a result of what happened to her last season, she’s unable to have more children (the “more” part was oddly left out–it’s not that she can’t give Rory children (which is, ugh, an awful formulation), they already have a daughter…she can’t have more children…so misogyny 1.5 would be the erasure of River Song). Seriously, like this was a noble fracking thing to do? Ultimately Amy and Rory reunite, but the very idea that this could be a sign that you love someone, that it’s somehow equivalent to waiting 2 millenia for your partner, is, well, bullshit. So she’s infertile; big deal. Women are not wombs.

Second, there’s manic pixie Dalek girl. I think we have to read this alongside Lang’s Metropolis: smart, cute, inspiring and ingenious white girl is so threatening she has to be turned into a robot. (Isn’t this sorta what happens to River Song, too? She transcends even robot form, becoming data–as a program, she “is saved.”) Much is made of this new girl’s intelligence; she is, after all, gonna be the new companion. But the sense is that a woman can be so exceptionally brilliant, strong, etc., only if she isn’t actually female–if her body is killed and she’s downloaded/uploaded into a robot body. MPDG’s robot body also amplifies her queerness (her first love was Nina, remember?). The overall effect is that MPDG is not a woman–she’s neither female nor feminine–because you can’t be awesome and be either of those things, and/or because these are so threatening that they need to be contained and domesticated.

And then there’s milk and eggs: milk is what Amy will never produce, and what MPDG either hallucinates or is structurally blind to. It’s easy to read this as the femininity that both have to give up to be worthy matches for the Doctor. Femininity is sort of abjected here, right? Eggs=eggs-terminate?

So contrasting Amy and MPDG, we see that Moffat de-sexes (removing femaleness) and de-genders (removing femininity) from both old and new companions. While this scrambling of sex and gender could be the start of an alternative conception of femininity and femaleness, in Moffat’s hands, it’s not. He has a long track record of misogyny, both in Who and in Sherlock.

← Music as the Other of Philosophy and Proxy for Philosophy’s Others: Some Initial Thoughts On Grosz
We Are The New Body Police →