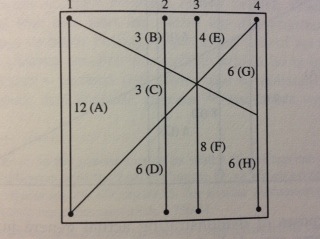 The aulos is troublesome because it is not adequately proportional: its visible and auditory physical functioning (the intervals or ratios between pitches produced by finger-holes bored in visually/geometrically proportionate ratios) does not truthfully manifest the underlying logos of mathematical harmony/proportion. (This is why the aulos is associated with femininity—both are unruly and immoderate.) Similarly, one’s outward appearance served as evidence of one’s moderate—or immoderate—ethos. As Plato says, “if the fine dispositions that are in the soul and those that agree and accord with them in the form should ever coincide in anyone, with both partaking of the same model, wouldn’t that be the fairest sight for him who is able to see?” (Republic 402d; emphasis mine). Or, as Foucault puts it, sophrosyne’s “hallmark, grounded in truth, was both its regard for an ontological structure and its visiblybeautiful shape” (HSv2 89; emphasis mine). Outwardly visible harmony should be the manifestation or expression of inner harmony. As Foucault puts it, “the individual fulfilled himself as an ethical subject by shaping a precisely measured conduct that was plainly visible to all” (HSv2 91). Inner harmony ought to produce outward beauty.
The exact nature of this relationship between inner and outer harmony was, however, a subject of disagreement among ancient Greek philosophers. Some, like Pythagoras, saw, or rather heard, a direct correspondence between perceived visual/auditory harmony and mathematical harmony. In this view, perceptual harmony was directly proportional to intellectual/mathematical harmony. Plato critques Pythagoras’s theory of harmony because the latter reverses the proper order between material structure and intelligible logic. According to Plato, Pythagoras “put[s] ears before the intelligence” (Repubic 531a), placing disproportionate emphasis on auditory perception, and insufficient emphasis on mathematical proportion (or, “consideration of… numbers” (531c).) The most musical intervals/proportions/ratios are not the ones that sound most consonant, or are most visibly beautiful, but the ones that are the most mathematically and/or philosophically proportionate. In other words, Plato thinks the relationship between visual/auditory proportion and mathematical/philosophical proportion must itself be proportionate, putting greater weight or emphasis on the intellectual than on the perceptual.
In Plato’s Symposium, Socrates functions like an aulos because his visual appearance does not directlycorrespond to his intellectual harmoniousness. In the same way that auloi can produce visually and acoustically consonant phenomena that are neither directly nor necessarily tied to specific mathematical proportions, Socrates’s visual beauty is not directly proportionate to his intellectual beauty. He is visually dischordant—ugly, mocking and mean, anti-social, etc.—but intellectually harmonious.
To someone who, like Pythagoreans or Alcibiades in the Symposium, thought the relationship between visible and intellectual harmony was a “mutual exchange of beauty for beauty” (218a), Socrates seems very disharmonious. This is why Alcibiades, in his praise of Socrates at the end of the Symposium, compares Socrates to an aulos/ανλονς(215b). But the joke is, as ever with Socrates, on us, that is, on those who think he really is like a flute or flute-player.  For Plato, visual beauty ought to be accorded les import than intellectual beauty—that’s the Symposium’s main argument, after all. Socrates might not be visibly beautiful in equalproportion to his intellectual beauty, but he is visibly beautiful in proper, mathematical, harmonic proportion to his intellectual beauty. Which is to say: Socrates accords greater import and attention to intellectual beauty, because that is its proper place and function. Ironically, his initial aulos-like qualities are evidence that he’s more like a well-tempered stringed instrument (e.g., a kithara). His mind is significantly more harmonious than his body…and that’s what makes him more proportionate than anyone else, “gold” (and more proportionate, like the guardians) rather than just “bronze” (less proportionate, like the plebs) (Symposium 219a). Socrates seems like an aulos only to those who do not recognize the true and proper relationship between visible/perceptual and intellectual harmony.[iv]
So “proportion” is a ratio that is representable both visually/perceptually and mathematically; metatheoretically, the relationship between perceptual and mathematical proportion is itself proportionate. The Greeks visualized mathematical ratios in geometric terms. As Plato states in the Republic, “A man experienced in geometry would…grasp the truth about equals, doubles, or any other proportion” (530a). Mathiesen includes to diagrams that clearly show how Greeks thought sonic harmony was a function of geometric ratios.

[this is Mathiesen’s diagram]
Because I’m a theorist and not a trained mathematician, and because even the Greeks widely and wildly disagreed about the specific methods for mathematically calculating ideally harmonic ratios, I’m not going to go too deeply into the calculations. I do, however, want to convey a general sense of the proportionality. Distilling centuries of often inconsistent and conflicting mathematical accounts of musical harmony to their common denominator, Mathiesen explains:

The story of Pythagoras’s discovery of the harmonic ratios is told and retold by many writers, Greek and Latin, with certain variations, but its essence lies in the application of four numbers—12, 9, 8, and 6—to produce the Pythagorean ‘harmonia.’ Nichomachus’s version has Pythagoras first detecting the consonant intervals of the octave, fifth, and fourth…” (399)