no existence can be validly fulfilled if it is limited to itself. it appeals to the existence of others.

When I was home in West Chester one summer after my first or second year of grad school, I had lunch with my high school oboe teacher. We did the usual catching up, and because she always had lots of cats, I told her I got a cat, a tortie named Simone. She told me her tortie, Clancy, who she got when *she* was in grad school, had recently passed. Now I’m in my former teacher’s place: 10 years out of grad school, and the cat who got me through it has just passed. (Are grad school cats a Thing? It seems like they might be. Like, people get their first pet that’s all their own when they’re in grad school, and cats are easier for renters, so, grad school cats.) 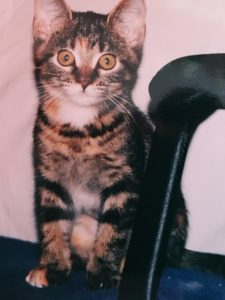 I started grad school in fall 2000, right as some of my college friends were landing sweet dot-com jobs that they’d soon lose. I moved to Chicago in August; I had a tiny studio on Patterson (just north of Addison) between Sheridan and the lake. And I was all alone. School didn’t start for a month, and when it did, I found myself a woman in a philosophy program, i.e., surrounded mostly by men (without the kindness and mentorship of J, C, and C, the three women in the program, I’d have been really lonely). So it’s the beginning of October, I’m in a new city, no real friends yet, living by myself for the first time…I was just lonely. I planned on getting a cat sometime, but hadn’t decided when exactly: it was on the list.

So, one Saturday in early October 2000 I head down to the Loop to have some brunch and donate blood. I had signed up for some blood drive or something. Brunch was…I can’t remember, but I got turned away from the blood donation center because apparently I was both too skinny and too low-iron. So I’m wandering around the Loop, and I stumble upon the Anti-Cruelty Society shelter, which is on Grand. And I go in. And I check out the cats.

AND THERE’S A TEENY TORTIE KITTEN WITH HUGE EYES. And like some cheezy, stereotypical rom-com, we just clicked. I knew she was the cat for me. So I put my name in for her, and sat in front of her cage until the approval came through (I was afraid I’d lose her to someone else if I left). I had to wait a week for them to fix her. Over that week I thought about names; I’d never named a pet before. It seemed so permanent, so weighty. I thought about what was important to me, a name that would always mean something to me and that I wouldn’t hate in five years. So I picked Simone, after Simone de Beauvoir. I know, I know, philosoper cliche, but…Beauvoir’s Ethics of Ambiguity (where the epigraph is from) continues to be the foundation of my thought. We make the world with others, we depend on one another for our independence. And I depended on Simone. We made our world together. Even if that world was mostly her knocking my water glasses over, lol.

Simone it was. So two Mondays later I rode the red line down to Grand, picked her up in a cardboard box full of holes, and rode with her back up the red line. She was far from silent about that train ride, but her baby mews were a huge hit with the people around me.

We lived in our studio for a year or so. I didn’t have a car in Chicago that year, so I lugged cat litter up Sheridan from Jewel. We flew home to West Chester a few times; flying a kitten home for that first Thanksgiving, taking her out of her carrier to go through pre-9/11 security at ORD…I think I still have some claw scars on my chest?

That first year I still had the Gateway PC I bought in college. Simone would lie down on top of the CRT monitor so that her paws and chin hung over the edge, peering down at me as I worked. Either that, or she’d curl up to the book or stack of articles I had on my desk as I typed. Throughout her life she always, always sat with me while I worked. I don’t know if it’s just because my computers gave off lots of heat, or if she wanted to be near me, but we’ll pretend it’s the latter.

After that first year I had roommates, and they all liked Simone better than they liked me. I remember she would monorail cat my roommate M’s stereo before monorail cat was a thing. I brought my car to Chicago my second year, which meant we drove back to Ohio for holidays. Which meant Simone puked from Chicago to Lafayette. I finally got in the habit of just driving her around the block till she puked herself out, cleaning that up, and *then* heading down 90/94. I still have that fucking Corolla, cat puke, cat hair and all.

At my parents’ she got used to dogs; they got a new puppy during spring break my first year, so Simone knew dogs at their worst. She’s always been pretty DNGAF to Sputnik and Laika. This winter she and Laika even got comfortable enough to curl up next to each other, as long as I was there to keep the peace. Simone would always curl up in the crook of my bent leg. That was her spot. Or she’d sit on my lap as I typed, her head burried in my arm.

She was never particularly a trouble maker. She did dig her way into my parent’s couch, running around in the internal structure as I sat on it (that felt weird). But otherwise the worst she did was knock water glasses over. And beg for food all the time. (She was fat. And food obsessed. Not that I taught her that food obsession or anything.)
Then in 2004 I moved downstairs from my now-partner Christian. He had two cats, Hugo and Hyphen. We’d eat and watch TV in my apartment every night (bigger kitchen, cable TV), and then herd everyone upstairs to go to bed. Yup, we herded cats up and down stairs every day…Simone and the Hs never really got along. Eventually they each settled on opposite sides of the house, with Simone wandering out into the kitchen/living area because she wasn’t bothered by the dogs. She took our bedroom as her territory, so she’d often crawl up and sleep next to me at night. In her last months, she would sit right next to my laptop on the kitchen table as I woke early early early to pound out some writing before the day got started. She was always with me. We had what felt to me like a real, deep bond. We found each other lonely in the city and got each other through life.

← My EMP 2016 Talk –> Started From the bottoms Now We Hear: queered voice in the era of post-feminist pop
IASPM-US/CA Talk →