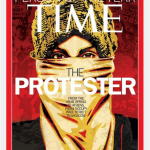 So, it is often the case that women’s accomplishments (in art, research, business, politics, whatever) are often overlooked for, read in terms of, seen as dependent on, or otherwise secondary to their appearance. Adrian Piper has commented on the tendency…