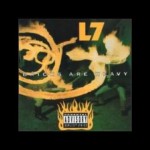 Icona Pop’s “I Love It” is definitely going to be one of the big songs of 2013. It’s a great little pop song that’s all over charts and in several advertisements. Some people are writing about the sociological and cultural…