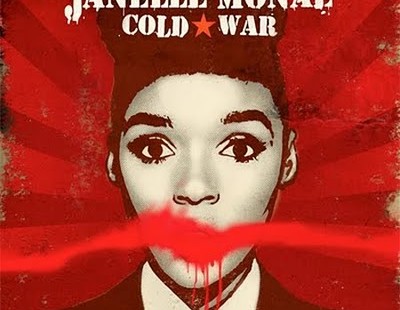 As promised, here is an excerpt from a work in progress where I read Monae as critiquing Shephard Fairey’s appropriation/use of images of radicalized non-Western women of color. 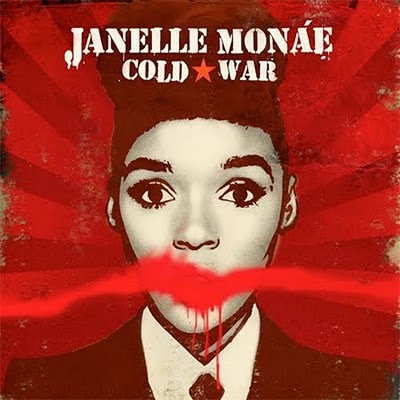 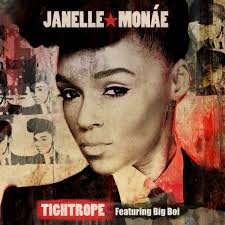 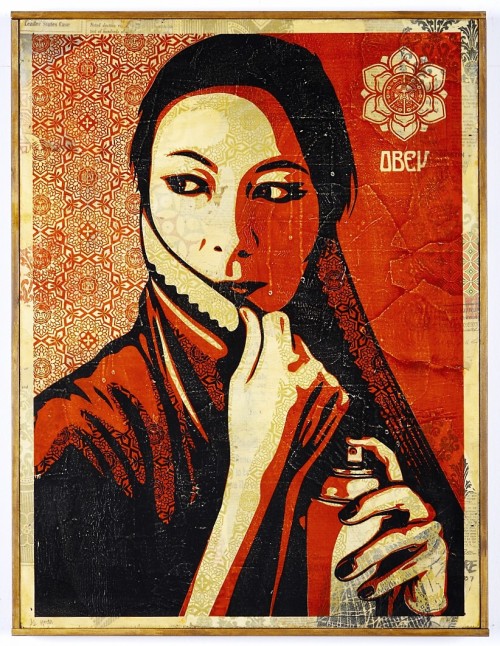 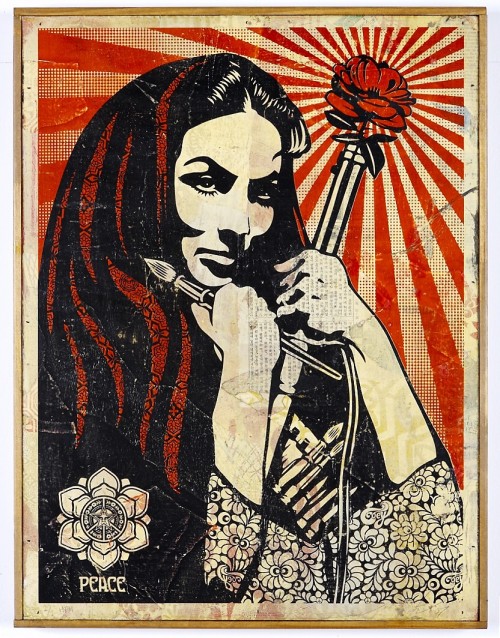 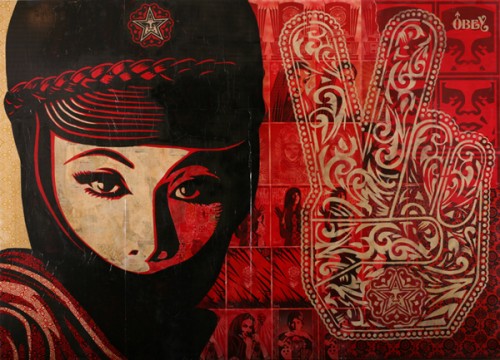 The cover art for Janel Monáe’s 2010 singles “Tightrope” and “Cold War” appropriate the aesthetic of Fairey’s images of radicalized non-Western women of color in a way that critiques rather than reinforces or reworks the logic of hipness. While Fairey presents others/Others in his own style, Monáe presents herself in the style of Fairey’s works. Monáe’s covers break with the logic of hipness because they adopt Fairey’s aesthetic choices, not his (or other white male hipsters’) perceived personal attributes or social identity. In so doing, Monáe demonstrates the racist and sexist assumptions behind his appropriations of exoticized, orientalized non-Western femininities of color.

Both covers share the street-art aesthetic and red, black, and white color scheme of much of Fairey’s work. Stencil- and spraypaint-like effects are used on both covers, and both appear to have been “distressed” (i.e., perceived “wear-and-tear” is built into the composition). “Cold War,” for obvious reasons, also makes use of his communist/constructivist styles (the red star, the sunburst as in “Revolutionary Woman with Brush”). Like the “Mujer Fatal” mural, the “Tightrope” single uses a background of repeated images of women. The main difference between Monáe’s covers and Fairey’s works is the power dynamics: Monáe’s works are a self-representation of an aesthetically and politically oppositional African-American woman, whereas Fairey’s pieces are the representation, by a multiply-privileged subject, of a multiply-marginalized object. In Monáe’s covers, she is both subject and object, while the radicalized non-Western women of color in Fairey’s works are just objects—or rather, instruments in Fairey’s self-representation. The “Cold War” cover addresses Fairey’s instrumentalization of women of color. Here, the horizontal red streak covering Monáe’s mouth suggests that the Commandata’s spray paint has put a gag on the singer. Fairey’s images of non-Western women of color silence and erase actual women of color, be they artists and/or activists. Thus, Fairey’s supposedly “peaceful” graffiti bombing is in fact a sort of “cold war.” The track’s lyrics suggest that, in a supposedly post-feminist and post-racial society where women and POC have “political” emancipation but lack “real, human” emancipation, the feminist, anti-racist struggle is now a cold war—i.e., a struggle fought indirectly, e.g., through coded language and/or the politics of representation. Cold wars proceed paradoxically: just as Americans and Soviets kept the peace by building stockpiles of weapons, white heteropatriarchy perpetuates misogyny, Eurocentrism, and normative whiteness by romanticizing and instrumentalizing non-Western femininities of color.

Monáe presents herself in the style of Fairey in a way that reveals his works’ silencing of women of color, and subsequent inclusion within, rather than opposition to, white heteropatriarchy. His works’ cultural capital (i.e., hipness) is the surplus value derived from the symbolic “work” performed by these images of non-Western women of color; thus, like all forms of hipness, Fairey’s appropriation of postmillennial black hipness does not break with, but participate in, hegemonic economies (of identity, of cultural value, etc.).