October 5, 2012 · by Robin James · in affect, Bangerang, brostep, dubstep, film, music, Music as a Gradual Process, neoliberalism, post-cinematic, reich, Shaviro, Skrillex
Steven Shaviro’s Post-Cinematic Affect addresses the way the shift between classically liberal and neoliberal systems of social/artistic organization plays out in film and 4D visual media (And, I’m working with the version printed in Film-Philosophy, because that’s what I taught earlier this semester, and that’s what I initially prepped these remarks from). He argues,
Just as the old Hollywood continuity editing system was an integral part of the Fordist mode of production, so the editing methods and formal devices of digital video and film belong directly to the computing-and-information technology infrastructure of contemporary neoliberal finance (3).
I want to think through his concept of post-cinematic affect in order to figure out what neoliberal cinema and neoliberal pop music have in common, and what they don’t. My initial intuition is that medium matters: post-cinematic 4D media and extra-tonal pop might both be iterations of the same underlying neoliberal program, but the context of their iteration likely alters the program as it is articulated/realized in the medium. BUT, especially given the homologous digital environments in which contemporary 4D viz media and music are produced and consumed, the media—or, at least, the materiality of the media—might not actually be that different. So if there are slight variations between neoliberalism as 4D viz logic, and neoliberalism as 4D musical logic, what’s the cause or source of these variations? I’m thinking the source of differences between post-cinematic and extra-tonal might be the different cultural contexts, habits, practices, etc., that shape the production and consumption of viz and audio media. For example, mainstream audiences can handle much more abstraction in music than they can in visual media, it seems: various genres of electronica and hardcore metal approach “absolute music,” but even something as ostensibly content-less as Transformersstill has a nominal plot, characters, etc. But we’ll see if all these intuitions bear out.
First, some terminological caveats: In the case of music, it can be really muddy to call it “post-tonal” affect, because the term “post-tonal” already connotes and denotes 20th c avant-garde art music practices like free atonality, serialism, process music, minimalism, and so on. Because “post-tonal” is already taken, I’ve used the term “extra-tonal” to indicate specifically neoliberal departures from (classically liberal) tonality. But, “extra-tonal” is kinda clunky, so I prefer Jacques Attali’s term “repetition” to describe this regime of musical organization. My essay in The New Inquiry explains the connection between Attalian repetition and neoliberalism. You can read all about that there, so I’m not going to re-hash it here.
I’m going to address specific concepts, breaking them down into sub-topics. This is not really systematic at all, as this blog is, as usual, the first working-through of my thoughts.
The Sine Wave
Sound and light both exist as radiation, as sine waves. Music, at least when it is heard by un-modified human ears, takes this form. The logic of the sine wave (peak and valley, asymptotes, frequency and amplitude) is also the logic of biopolitical neoliberalism—statistics, data profiles, etc., all these get graphed as curves, like the peaks and valleys of a sine wave. The sine wave just describes the unfolding, over time, of patterns of peaks and valleys (rather than one atemporal statistical distribution around a norm, as in a bell curve).
Shaviro appeals to the logic of the sine wave in his analysis of Grace Jones’s “Corporate Cannibal” video. For example, even though he’s talking about digital media—binary code, not actual analog wavelengths—the binary code is, in his account, patterned like a sine wave. In the video, “every event is translated into the same binary code, and placed with in the same algorithmic grid of variations, the same phase space” (14). Phase space is another term for frequency (on a wave, the space from peak to peak, valley to valley, for example). So here code behaves like an analog wavelength—because this logic of the sine wave is neoliberalism’s logic. As Shaviro puts it, “Jones embodies capital unbound, precisely because she has become a pure electronicpulse” (31; emphasis mine). Electronic signals, like neoliberal capitalism, are organized as sine waves. Biopolitical neoliberalism sets/constitutes the “algorhithmic” or statistical grid lays out the “predetermined set of possibilities” within which everything can be contained. So, neoliberal post-cinematic viz media and extra-tonal/repetitive pop music are both primarily digital media, but, because they are neoliberal, the digital is organized or patterned like an analog sine wave. This is one way to read Shaviro’s claim that “digital video is expressed in binary code, and treated by means of algorithmic procedures, allowing for continual modulation of the image (16). Basically, neoliberalism organizes media to work like “an electronic signal whose modulations pulse across the screen” (16) or through the speakers. Neoliberalism, as a biopolitical/statistical regime/episteme, is responsible for this patterning. So, “Jones’s electronic modulations track and embrace the transmutations of capital” not only because “video modulations and the worldwide ‘culture of financial circulation are both driven by the same digital technology” (31), but, more importantly, because they participate in the same underlying episteme—the logic of the sine wave.
Sine waves have asymptotes—upper and lower limits that can be approached in ever-more-exponentially narrow intervals (think Zeno’s paradox), but never touched or crossed. Sine waves bounce between upper and lower asymptotes. Shaviro explicitly identifies an “asymptotic approach” as a “principle behind [the] formal organization of sounds and images’ (88), in post-cinematic film. He also implicitly attributes the idea of asymptote to post-cinematic cinema, speaking of, for example, structures that “ru[n] repeatedly through a holding pattern” (88), or the ““state of teetering on a precipice without actually falling over; or better, of falling over but never finishing falling over, never quite hitting the ground” (87). His most evocative description of neoliberalism’s asymptotic logic focuses on the “phase space” or upper and lower asymptotes of a sine wave. A post-cinematic film bounces back and forth between upper and lower limits, producing the paradoxical affective texture

overloaded to the point of hallucination; yet at the same time it depicts a culture drained of vitality and on the brink of death. The movie exuberantly envisions the entropic dissipation of all energy and the implosion of social and media networks into a flat, claustrophobic, degree-zero banality. This end-point looks continually before us, but it is never quite reached” (88).

Even when all the cards are on the table and everyone hears what is gradually happening in a musical process, there are still enough mysteries to satisfy all. These mysteries are the impersonal, unattended, psycho-acoustic by-products of the intended process. These might include sub-melodies heard within repeated melodic patterns, stereophonic effects due to listener location, slight irregularities in performance, harmonics, difference tones, etc…That area of every gradual (completely controlled) musical process, where one hears the details of the sound moving out away from intentions, occuring for their own acoustic reasons, is it.

Basically, at the point where data-streams cross—when the sounds generated in the performance meet and interact with material variables (in listeners, in performance enviornments, etc.)—unpredicted effects can emerge. No control system accounts for everything; sure, it can rapidly adapt to and co-opt emergent phenomena, but it can never exhaustively capture each potential variable.
Reich repeatedly emphasizes that these moments of genuinely unpredicted deviation cannot be intentionally produced, predicted or willed: “While performing and listening to gradual musical processes one can participate in a particular liberating and impersonal kind of ritual. Focusing in on the musical process makes possible that shift of attention away from he and she and youand me outwards towards it.” Part of the reason why these phenomena can’t be intended/willed is because they are not subjective (he, she, you, me) phenomena; rather, they occur at the level of populations, institutions, systems (or, as Deleuze might say, packs).[iii]

Contemporary pop songs are microcosms of larger-scale neoliberal structures.
Shaviro argues that the “difficult task, therefore, is to translate…the impalpable flows and forces of finance into images and sounds that we can apprehend on the screen” (37). Contemporary pop genres like EDM and dubstep actually do that work of translation: they articulate or express the very “libidinal flows [that] are coextensive with financial ones” (49), but in very concrete, non-abstract ways. I’m going to be brief and somewhat schematic here:
1.    Because there is no teleological development, just the back-and-forth between upper and lower limits of intensity, there is neither resolution nor harmony (both very important in tonal music, both actually related: harmony is what gets resolved). And it’s not so much a “sense that you never finish anything” or of “endless postponements,” but rather that finishing or postponement are non-issues. It doesn’t feel like a postponement because we’re not expecting/listening for a “finish.” Or, as Shaviro puts it, “Worrying about long-term prospects and consequences is a luxury that nobody can afford. In a world of ‘just-in-time’ production, one cannot make more than ‘just-in-time’ plans” (53). If there’s no large-scale form except what the moment-to-moment details tell us, then we can’t hedge our bets on some future payoff, because the exact texture of that future is not determinable with sufficient precision.
2.    Instead of functionalist hierarchies, modularity: Tonal harmony is a hierarchy of chord functions: tonic, dominant, sub-dominant, mediant, etc. Each chord has a function (resolution, implication of resolution, delay/diversion from resolution, etc.), and functions are all ordered hierarchically in relation to a primary chord. Neoliberal music and cinema, like “financial derivates[,] are ‘functionally indifferent’: they can be used to ‘price,’ and thereby stand in for, the ‘risk’ implicit in any situation whatsoever…Things don’t need to harmonize, or fit together” (Shaviro 53). Basically, by voiding functionality, the hierarchy collapses (or by voiding the hierarchy, functionality collapses). Instead of functional, organic wholes, compositions are arrangements (assemblages) of modules. Modules can be arranged in any order, because there is no hierarchy of functions that demands specific types of organization. With functionality voided, the rise and fall in a song can’t be teleological, because there is no clearly-defined goal or orienting center. In other words, there’s no development, no cause-and-effect-like logic to the song’s unfolding through various different elements/motives/etc. As in all Manovichian new media, “the cutting-and-pasting of elements that are synchronically available in a database replaces the suturing of shots that unfold diachronically” (Shaviro 79). Rihanna’s “Where Have You Been” is a modular song; I discuss it here. Shaviro calls this post-cinematic cutting-and-pasting digital compositing, and I think it’s most evident, musically, in pop dubstep like Skrillex’s. Pop dubstep composition is, in a way, the musical equivalent of Michael Bay’s cinematography. According to Shaviro, “Bays’ films…eschew considerations of continuity almost entirely, in favor of disjunctive cutting engineered so as to maximize shock” (80). This shock-intensifying disjunctive cutting is an equally apt description of Skrillex’s hit “Bangerang.”
Formal Diagram of “Bangerang”:
A: 4 measures
A1: 4 measures plus “shout to all my lost boys:
A2: A1 + additional synth + cymbal roll
B starts w/ first lite-drop
B
B
B
A1
A2.1
B
B
Bhalfprime
Bhalfprime
C (soar starts)
C
D (break)
D
A1.1 (soar for real)
A2.2
B (sort of drop, but not really a classic dubstep drop b/c not in the bass bass)
B
B
B
E
3.    So how is brostep, exemplified here by “Bangerang,” analogous or homologous with post-cinematic film?[iv] Let’s break this down:
a.    The song is composed of samples or computer-generated patterns. Each individual sample or looped synth motive is modular—it’s like the sonic expression of a note written with letters cut out from different printed sources, sorta like the Sex Pistols used on “God Save the Queen”. 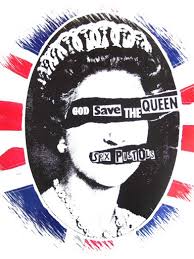 ← “Loving the Alien”: My article in The New Inquiry
XContinental Philosophy Collective/Manifesto →